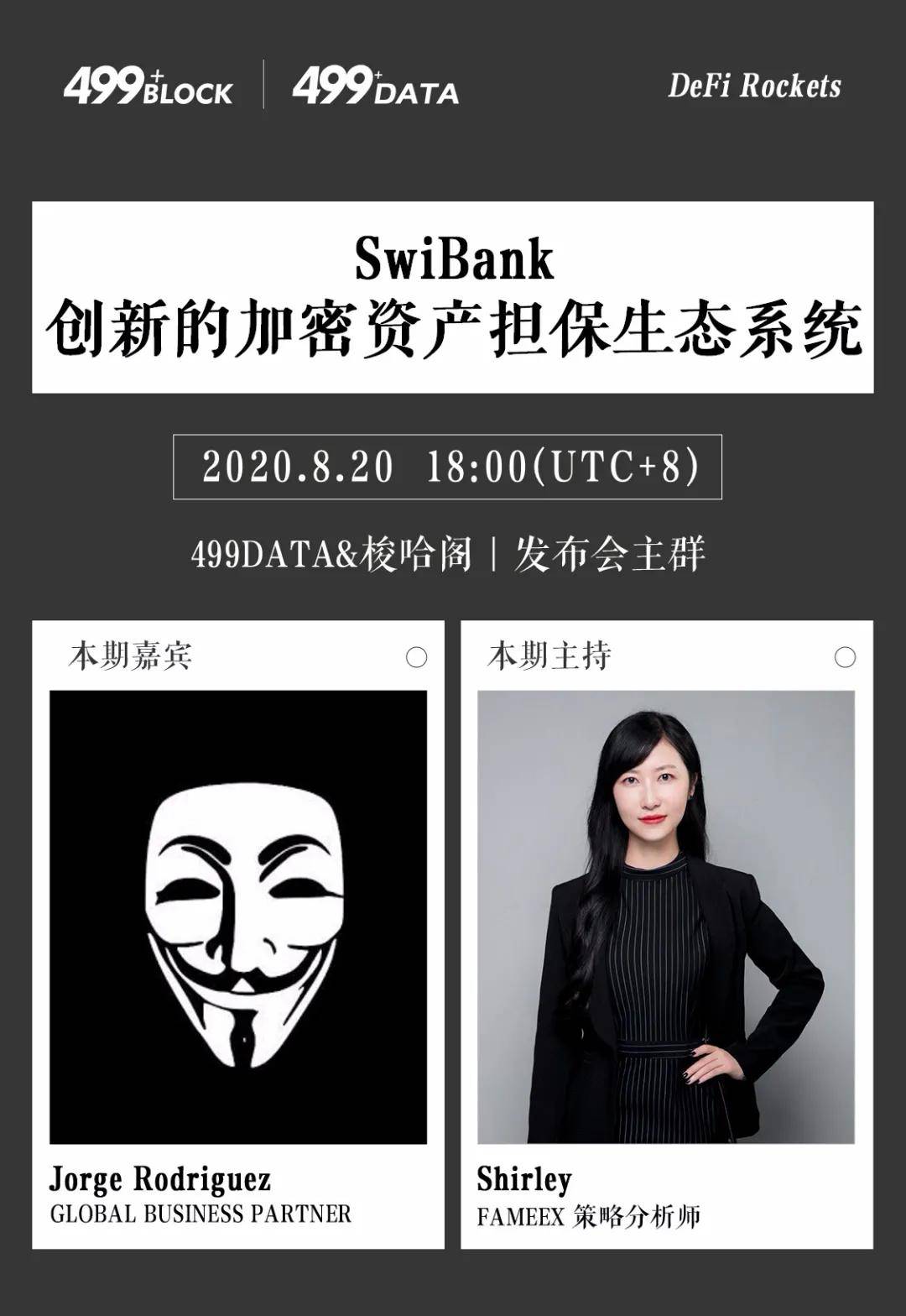 Shirley：Could you tell us about yourself?

Jorge：I'm Jorge, I have been dedicated to blockchain for years and have participated in many projects. Among them ethereum, komodo, pledgecamp etc.

I find the growth of China very interesting in terms of blockchain and how they are leading the creation of networks and DeFi projects.

Shirley：When did you first time know about blockchain and why did you choose to enter this field?

Jorge：I have been since the beginning of Bitcoin, in 2010 I already read Satoshi's white papers and it was a world that fascinated me. Decentralization returns economic power to the people.

Shirley：What is your opinion on Defi?

Jorge：In short, DeFi is a tool that allows us to make traditional banking systems decentralized, preventing regulatory entities from abusing your privacy and rights. All this from open source that people can review and understand.

DeFi lets the people regain control of their money.

Jorge：Swibank is an open-source decentralized (DeFi) cryptoasset based in ethereum.

The system is locked in by collateralized digital assets, contracts, and can lend Flat currency assets or other data assets.

SwiBank aims to create a lending platform with digital assets as a pledge, with holders enjoying a dividend in digital asset appreciation while getting easy, safe and lowcost loans.

Shirley：What's the benefit of holding SKT?

Jorge：Holders will have monthly profits enjoying monthly dividends and increasing their bags.

Shirley：What is the Stable coin SSC?

Jorge：Is a soft-anchored dollar asset-backed cryptocurrency, which is issued in a non-centralized and unbiased way.

SSC has been issued on the Ethereum blockchain and some other popular blockchain，Holding SSCs requires a cryptocurrency wallet or crypto-asset platform.

SSCs have low thresholds for generation, access, and use.

Users create SSCs by using the SwiBank protocol to create a "SwiVault" smart contract and deposit assets. This process is not only the process of SSC into the circulation area, but also the process of users obtaining mobility.

In addition, users can buy SSCs from intermediaries or exchanges, or, more simply, if they are willing to accept SSC to pay.

Whether you generate, buy or receive SSCs yourself, they are no different from other cryptocurrencies: you can send SSCs to others, use them to buy goods and services, or even transfer SSCs to savings accounts through a SwiBank protocol feature called SSC Deposit Rate, SSR.

Every SSC in circulation is endorsed by excess assets - the value of collateral is always higher than the value of SSC debt - and all SSC transactions are publicly visible on the Ethereum blockchain.

Shirley：What are the functions of SSC?

• The medium of exchange.

Jorge：Each SwiBank vault (e.g., ETH vault) has its own unique set of risk parameters, which are mandatory.

These parameters are determined on the basis of a risk prediction of collateral and are directly decided by the SKT holder.

The following are the main risk parameters of the SwiBank vault:

SwiBank Governance sets a debt ceiling for each collateral to ensure that the collateral portfolio of the SwiBank agreement is sufficiently diverse.

Once a security has reached the debt ceiling, it is impossible to generate more debt unless a user has repaid some or all of its vault debt (thus freeing up the debt space).

• Liquidation Penalty: Liquidation penalty is an additional fee charged to the user on the basis of the total amount of the outstanding SSC in the vault at the time of liquidation. Liquidation fines are designed to encourage vault owners to maintain the pledge rate at an appropriate level.

• Collateral Auction Period: The maximum auction time for each SwiBank vault is specific. Debt auction period and surplus auction period are the overall parameters of the system.

• Auction duration: The minimum duration before the end of a single auction.

• Auction Step Size: This risk parameter is designed to motivate early bidders in auctions and prevent the proliferation of too low mark-ups

Shirley：Risks and mitigations for governance

Jorge：In order to maintain the successful operation of the SwiBank protocol, SwiBank governance requires the necessary risk mitigation measures. Some of the risks and corresponding mitigations are described below.

One of the biggest risks to the SwiBank protocol is malicious actors. For example, a programmer discovers a vulnerability in a 31/42 deployed smart contract and then exploits it to attack the protocol or steal assets from the system.

In the worst-case scenario, all decentralised digital assets that act as collateral in the agreement will be stolen and cannot be recovered. Mitigation: The SwiBank Foundation's first priority is to maintain the security of the SwiBank protocol, which is the strongest line of defense for formal verification.

Access swiBank's multi-guaranteed SSC security report Github library to view formal verification reports and audit reports on SwiBank protocols. These security measures form a powerful defense system; Even if formalized, mathematical modeling of expected behavior can be problematic, or assumptions about expected behavior itself may be wrong.

Jorge：The System Stabilizer Module's purpose is to correct the system when the value of the collateral backing SSC drops below the liquidation level (determined by governance) when the stability of the system is at risk. The system stabilizer module creates incentives for Auction Keepers (external actors) to step in and drive the system back to a safe state (system balance) by participating in both debt and surplus auctions and, in turn, earn profits by doing so.

Shirley：How will be the token allocation?

Jorge：Total issuance of SKT: 100 million The distribution method is as follows: